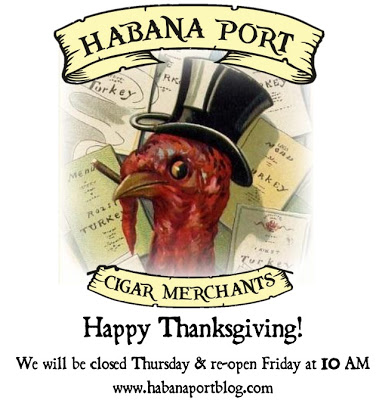 Greetings, lovers of turkey and torpedos. Habana Port Cigar Merchants would like to wish you a Happy Thanksgiving. We are very grateful for your support which without, we would certainly not be here. In order to reflect on our appreciation (and to get some rest for the upcoming Christmas Season), we are taking Thursday off. But don’t worry; we will return on Friday at 10 AM for normal business hours. 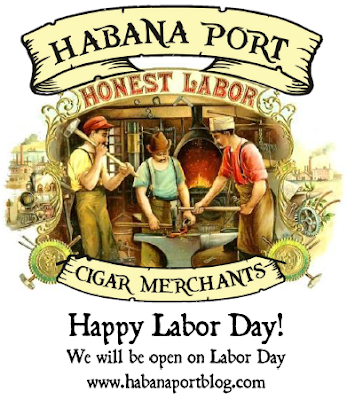 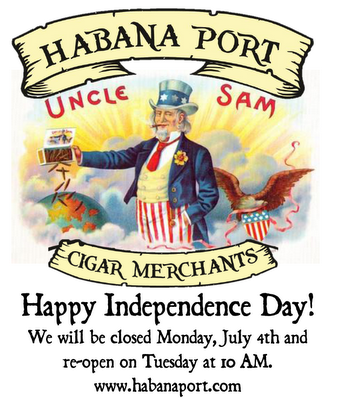 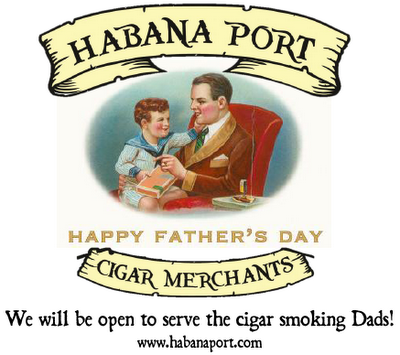 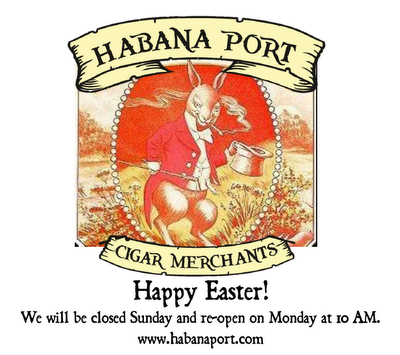 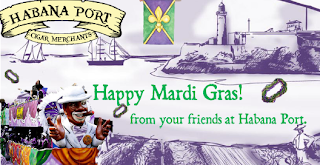 Saludos,
Greetings, revelers of robustos! Just an announcement for our shop hours for Carnival Season 2011. For those who don’t live in southeastern Louisiana, Mardi Gras is a big celebration so you can count on people and businesses not doing too much work during these party-packed days.
Basically we will have normal business hours with the exception of Fat Tuesday, March 8, 2011, when we will be closed for the day. We will open the following day at 10 AM.
So stock up now, smokers, and celebrate Carnival, Big Easy style!
Until the next post, siempre fumando,
Habana Port
Category: Uncategorized
Tags: Holiday, Store Hours 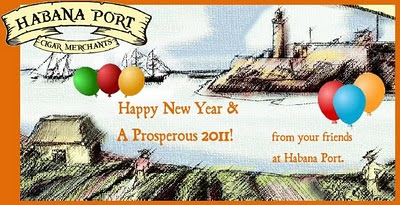 Saludos,
Greetings, fans of figurados. Please note the following New Year’s Shop Schedule.
Friday, Dec. 31 – 10 AM to 5 PM
Saturday, Jan. 1 – Closed
Sunday, Jan. 2 – Noon to 5 PM (we resume normal hours now)
Stock up on your smokes now in preparation for ringing in 2011! And be safe out there while you’re having some fun. Smoking a cigar or pipe is safer than fireworks, anyway. And no, it is not proper etiquette to light your fireworks with your lit cigar in case you were wondering.
Until the next post, siempre fumando,
Habana Port
Category: Uncategorized
Tags: Holiday, Store Hours 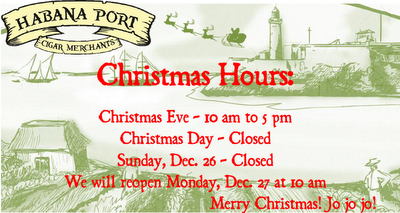 Saludos,
Greetings merry mavens of maduros! Here is our Christmas Season Store Schedule. We want to thank everyone for your support. It’s been a great ride thus far. Now get out there and smoke some fine tobacco!
Until the next post, siempre fumando,
Habana Port
Category: Uncategorized
Tags: Holiday, Store Hours 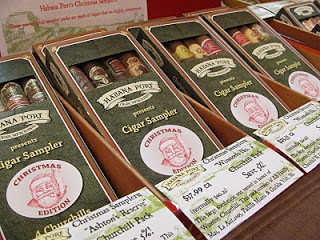 Habana Port Christmas Samplers.
Saludos,
Greetings, cigar smoking fans of Habana Port! Need a great cigar gift? Do you want to offer a great presentation? Do you wish to see the traditional image of Santa Claus enjoying his fine tobacco? Well, look no further. We at Habana Port are now offering our own Christmas Sampler boxes. We are offering 4-pack boxes in both a Robusto and Churchill size. This year’s beautiful Christmas design comes adorned in a yuletide theme and pictures a content, jolly St. Nick enjoying a fine cigar. Come on down to our shop and pick your cigars a la carte or save even more by purchasing our pre-selected assortments.

St. Nick fires up a cigar before making his annual journey around the world.
Until the next post, siempre fumando,
Habana Port
Category: Uncategorized
Tags: Holiday, Shop Promotions

Greetings, friends of Habana Port. We want to wish all the hard-working men and women of the United States a Happy Labor Day. We at Habana Port salute the labor force of this country and we know it is the motivated American laborer that makes this great country the best and most successful nation the world has ever known.

What better way to celebrate an American holiday with the most iconic American product – the handmade cigar. So come on in to Habana Port today and celebrate your success with a fine cigar (or pipe tobacco)! We will be open today until 5 PM.

Until then, enjoy this tidbit of the origins of this American holiday, brought to you by the United States Department of Labor.

Labor Day: How it Came About; What it Means
Labor Day, the first Monday in September, is a creation of the labor movement and is dedicated to the social and economic achievements of American workers. It constitutes a yearly national tribute to the contributions workers have made to the strength, prosperity, and well-being of our country.
Founder of Labor Day
More than 100 years after the first Labor Day observance, there is still some doubt as to who first proposed the holiday for workers.
Some records show that Peter J. McGuire, general secretary of the Brotherhood of Carpenters and Joiners and a cofounder of the American Federation of Labor, was first in suggesting a day to honor those “who from rude nature have delved and carved all the grandeur we behold.”
But Peter McGuire’s place in Labor Day history has not gone unchallenged. Many believe that Matthew Maguire, a machinist, not Peter McGuire, founded the holiday. Recent research seems to support the contention that Matthew Maguire, later the secretary of Local 344 of the International Association of Machinists in Paterson, N.J., proposed the holiday in 1882 while serving as secretary of the Central Labor Union in New York. What is clear is that the Central Labor Union adopted a Labor Day proposal and appointed a committee to plan a demonstration and picnic.
The First Labor Day
The first Labor Day holiday was celebrated on Tuesday, September 5, 1882, in New York City, in accordance with the plans of the Central Labor Union. The Central Labor Union held its second Labor Day holiday just a year later, on September 5, 1883.
In 1884 the first Monday in September was selected as the holiday, as originally proposed, and the Central Labor Union urged similar organizations in other cities to follow the example of New York and celebrate a “workingmen’s holiday” on that date. The idea spread with the growth of labor organizations, and in 1885 Labor Day was celebrated in many industrial centers of the country.
Labor Day Legislation
Through the years the nation gave increasing emphasis to Labor Day. The first governmental recognition came through municipal ordinances passed during 1885 and 1886. From them developed the movement to secure state legislation. The first state bill was introduced into the New York legislature, but the first to become law was passed by Oregon on February 21, 1887. During the year four more states — Colorado, Massachusetts, New Jersey, and New York — created the Labor Day holiday by legislative enactment. By the end of the decade Connecticut, Nebraska, and Pennsylvania had followed suit. By 1894, 23 other states had adopted the holiday in honor of workers, and on June 28 of that year, Congress passed an act making the first Monday in September of each year a legal holiday in the District of Columbia and the territories.
A Nationwide Holiday
The form that the observance and celebration of Labor Day should take were outlined in the first proposal of the holiday — a street parade to exhibit to the public “the strength and esprit de corps of the trade and labor organizations” of the community, followed by a festival for the recreation and amusement of the workers and their families. This became the pattern for the celebrations of Labor Day. Speeches by prominent men and women were introduced later, as more emphasis was placed upon the economic and civic significance of the holiday. Still later, by a resolution of the American Federation of Labor convention of 1909, the Sunday preceding Labor Day was adopted as Labor Sunday and dedicated to the spiritual and educational aspects of the labor movement.
The character of the Labor Day celebration has undergone a change in recent years, especially in large industrial centers where mass displays and huge parades have proved a problem. This change, however, is more a shift in emphasis and medium of expression. Labor Day addresses by leading union officials, industrialists, educators, clerics and government officials are given wide coverage in newspapers, radio, and television.
The vital force of labor added materially to the highest standard of living and the greatest production the world has ever known and has brought us closer to the realization of our traditional ideals of economic and political democracy. It is appropriate, therefore, that the nation pay tribute on Labor Day to the creator of so much of the nation’s strength, freedom, and leadership — the American worker.
Until the next post, siempre fumando,Habana Port