Written by
Saludos
Posted in
Uncategorized
Tagged
Cigar, Cigar Arrival, CigarEarth.com, Cigars, My Father Cigar, My Father Cigars, Rare Cigars
Comments
Leave a comment
Saludos,
Greetings, mavericks of My Father Cigars. The Don Pepin 10th Anniversary cigar is available now. In honor of the 10th anniversary of the opening of Don Pepin’s Miami factory, El Rey de los Habanos, he created this limited-edition cigar. Each cigar comes individually packaged in its own coffin box. Only a limited amount of the cigars were produced. We suggest you hurry into either of our locations to secure yours. Otherwise you can also order at http://www.cigarearth.com/Don-Pepin-Garcia-10th-Anniversary-Limited-Edition-by-My-Father-2752.htm
Until the next post, siempre fumando,
Habana Port 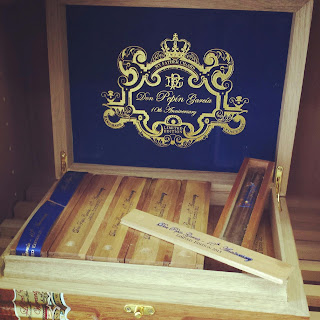