Saludos,
Greetings, zombie zealots. The Viaje “Super Shot Zombie” cigar shipment & authorized Viaje Retailer banner have arrived. The cigars included are the Super Shot Zombies (3.5×54), the White Label Project Super Shot (3.5×52) which was rolled in March 2012 and has a Criollo wrapper and the Exclusivo Super Lance (7.5×46). These are new cigars so we are excited to try them out.
In this shipment we also received the authorized Viaje signage for official Viaje merchants. Look for this banner otherwise you are buying fakes or through second parties and the prices are outrageous. We are the only official Viaje merchant in Baton Rouge & Covington.
Until the next post, siempre fumando,
Habana Port 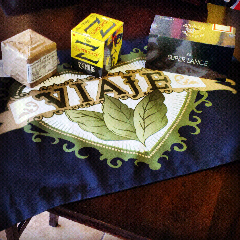