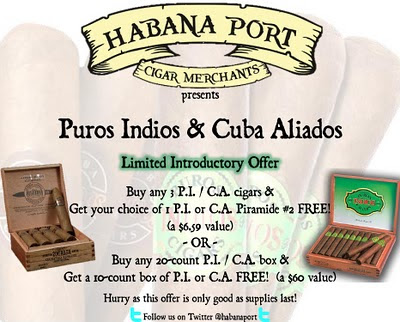 Saludos,
Greetings, aficionado de la hoja! We want to announce the arrival of Rolando Reyes, Sr.’s Puros Indios / Cuba Aliados cigars into our humidor. These famed cigars from Honduras are known the world over and to mark their introduction to Habana Port’s humidor, we are offering a limited special:
Buy any 3 Puros Indios/Cuba Aliados cigars and get a P.I. or C.A. Piramide #2 (6 1/2 x 56) cigar FREE! (value of $6.59)
or
Buy any 20-count box P.I. or C.A. box and get a 10-count P.I. or C.A. Piramide #2 box FREE! (value of $60)
Hurry in to our shop (or call 985-809-1818 or email info@habanaport.com) to purchase this deal because an offer this fantastic does not last long and we are only offering this buy while supplies last!
Now enjoy an excerpt from the company website informing us of the patriarch’s history.
“Don Rolando was born in Las Villas, Cuba near the town of Remedios in 1924. Rolando, alone among his siblings, insisted to his father that he wanted to be a “tabacalero.” He was all of 9 years old at the time. Finally, his father agreed to have him trained by the renowned Silvio Santana of the Tabacalera Pequeña in Zulueta. Silvio taught Rolando the techniques and all aspects of cigar making. Don Rolando later practiced his art of tobacco making at the Aguiar Cigar Factory near the city of Remedios where he lived.

In 1938, Rolando went to work in Pinar del Rio at the Jose L. Piedra Cigar Factory in Guanajay. This was followed by work in Havana at the H. Upmann Cigar Factory and later the Jose Gener & Batet Cigar Co. At these factories he mastered the art of making “figurados” and “parejos” – producing hand made cigars without a mold, as well as other techniques. He then returned to Placetas in Las Villas to establish his own cigar factory “Los Aliados”. After several years he moved Los Aliados to Havana; he was barely 21.

Rolando continued to operate with great success until the communist government confiscated his Los Aliados Cigar trademark and factory and personal properties in 1968. The government tried to take advantage of his knowledge by putting him to work in the El Rey del Mundo Cigar Factory. He refused, so the government retaliated by making him work in the rice fields.

Rolando immigrated to America in 1971, finally settling in Union City, New Jersey. There, Rolando worked in the textile industry by day and rolled cigars for sale in the evenings. In 1973 he constructed a building to house his family and cigar factory, changing its name to “Cuba Aliados”.

In 1988 he established his factory in Danli, Honduras because its conditions reminded him of Cuba, and he finished the move in 1989.

In late 1995, the ‘Puros Indios’ cigar line was launched and its unique blend has remained unchanged since its introduction; the filler blend in all ‘Puros Indios’ cigars are identical using a four country blend of tobaccos. All wrappers are Ecuadorian-grown from Sumatran seed and the binder is Ecuadorian. Puros Indios Cigars have been a success from the start, selling millions of cigars annually in the USA and internationally.

The new factory is built in the old Cuban tradition and is the best in Honduras and, his friends believe, among the best in the world. Rolando employs over 200 rollers and has over 300 employees producing over 75,000 cigars daily of his various brands. He claims to be the only factory owner who also retains the atmosphere of Cuban cigar factories of old, by having a full-time lector to read the day’s news and other literature to the rollers as they work. He continues to inspect all cigars manufactured in his factory.

Rolando Reyes Sr. has been called “The world’s most talented cigar maker.” He continues to use the magic of his gifted hands to create the world’s most highly sought-after cigars. Rolando Reyes Sr. considers himself to be a genuine “Cuban Tobacconist” in the old tradition. He continues to create premium cigars – refusing to lower quality, refusing to use chemicals to fumigate, and refusing to use chemicals as aroma or taste additives. Don Rolando embodies the term “old school” and is known as a cigar legend by his peers and loyal customers around the world.”